Melbourne is Australia's leading tech city, with a growing list of homegrown and foreign fintech firms, find out why.

According to Savills, Melbourne is the only Australian city that is among the best 22 cities for tech companies in the world.  Victoria's fintech sector is leading innovation in banking and payments, credit and lending, insurance and wealth management.  These three Victorian fintech companies, Airwallex, Judo Bank and Afterpay Touch, are among the world's top 100 fintech innovators.

Financial institutions and newcomers alike are keen to drive innovation.  Startups and especially unicorns are great innovators and help to improve the local talent pool. Melbourne is home to more than 330 fintech start-ups, and by the end of 2020, there were five homegrown fintech unicorns headquartered in Melbourne, collectively valued at over US$30 billion. 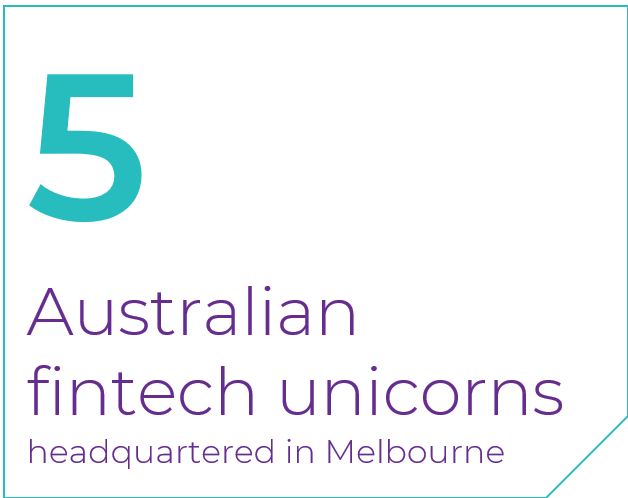 Airwallex was awarded Fintech Organisation of the Year award and AfterPay received the Global Market Presence award at the 2020 Finnie Awards, the national fintech awards run by Fintech Australia that is sponsored by the Victorian Government.

Right on the tail of these unicorns are also scaleups such as Moula ($160 million Series D in 2020), Prospa and Assembly Payments making their mark from Melbourne.

Australia punches above its weight globally for fintech.

In 2019, the A$3.8 billion Australian fintech sector1 saw 252 per cent growth in fintech investment.  Frost and Sullivan estimated growth between 2015-20 to be 76.3 per cent per annum and with more than 40 per cent of consumers yet to become fintech adopters the market is predicted to grow further to $18 billion by 20301.

Here are some of Australia’s notable attributes:

There are opportunities right now for fintech in Melbourne and Australia.

Australia is home to the highest number of regulation technology companies in the Asia Pacific, and the third largest RegTech sector in the world, behind the US and UK.  With recent reforms in Australia's banking superannuation and financial services industry, RegTech will become of paramount importance to ensure compliance  and transparency within a rapidly evolving banking and securities market in Australia.

The financial services sector is estimated to account for 50 per cent of the local cyber security market.  Cyber security will become of paramount importance to increase consumer awareness and confidence in digital products.  Melbourne is rapidly emerging as a market for cybersecurity solution services.

There is a greater focus on the superannuation sector as a source of capital to fintech start-ups. Due to it being a relatively untapped market, there is an opportunity for fintechs to engage with superannuation funds to create individualised experiences for their members and to provide cost effective advice.

There are significant opportunities in the sector that are showing considerable growth.  Australian incumbents are leveraging parterships to develop innovative insurance products and deliver services that better align with customer expectations.

GoCardless chooses Melbourne for its first office outside of Western Europe Why Melbourne for your fintech business?

The Victorian Government ‘gets’ financial services and understands the importance of building an ecosystem in which fintech businesses are nurtured and encouraged.  Melbourne’s concentrated finance sector delivers considerable margins with room for fintech to disrupt and grow.

Here are some of the reasons why you should consider Melbourne when setting up your fintech business.

Melbourne has a large and sophisticated financial services sector.

Financial services is the largest industry in Victoria, accounting for A$49.3 billion in Gross Value Add, representing 11 per cent of Victoria’s Gross State Product (GSP) and employing approximately 130,000 people.

Making Melbourne their home are:

This has made the city a thriving place for cutting edge fintech start-ups to develop and grow their business.

Session 4:  Disruption and Transformation in the Financial Sector